Built in the 18th century, the square is located between Nowy Swiat Street and'Ujazdowskie Avenue. The dassical St Alexander's Church has been in the square since 1818. At first, the square was also named after St. Alexander. Today, Trzech Krzyiy Square is an excellent example of how historical buildings can be combined with those from communist times and modern structures. A statue of Wincenty Witos sits at the southern end of the square. The square's northern edge with the adjoining stretches of neighboring streets is one of Warsaw's more popular entertainment areas, with plenty of clubs, pubs, cafes and restaurants grouped in one spot, including the Melodia, a venue famous before the war and reactivated in 2005 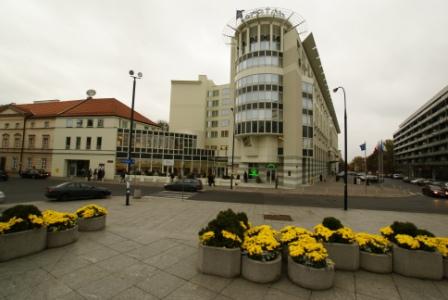 Krakowskie Przedmiescie Street
This street leads from Nowy Swiat to Zamkowy Square. It is one of Warsaw's most impressive streets, with many historic buildings. The striking palaces rebuat after the war are mostly OC(upied by state administration offices today. Many of the beautiful tenements are home to excelfent restaurants and cafes. Warsaw University and the Academy of Fine Arts are based on Krakowskie przedmieScie Street. 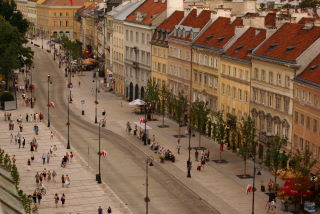 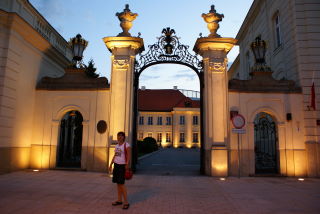 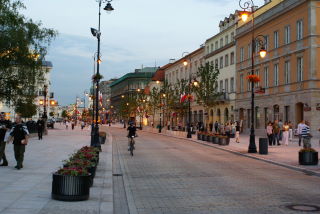 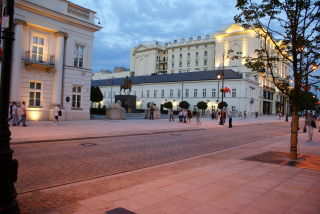 Nowy Swiat Street
The most elegant shopping street in Warsaw, its merchant tradition dates back to the early 19th century. This is where outlets of many European fashion houses and high-end cosmetic stores can be found. At No. 33/35 is the Blikle cafe and cake shop, a company that has been in existence since 1869 and is famous for the best donuts in the Polish capital. After the war, the street's Classicist tenement build¬ings were restored, while other houses were given pseudo-Classicist features to unify the style of the whole street. 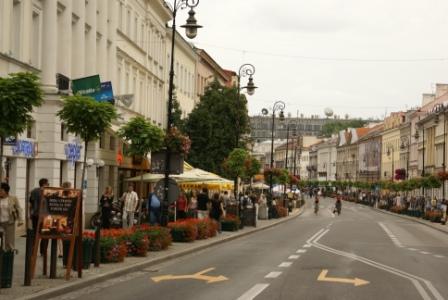 Palace of Culture and Science
The Palace of Culture and Science (PKiN)t formerly named after Josef Stalin. is the tallest building in Poland, with 42 stories and a height of 230.68 m to the tip of the spire. Its surface area is IB,O84 sq m, with a total of 3,288 rooms. Located in the center of Warsaw. on Defilad Squaret the Palace of Culture and Science was built in just three years and completed in 1955. It was designed by Soviet architect lev Rudnev. In architectural terms, it is a mixture of art deco, socialist realism and "Polish historism;' The palace is home to Kongresowa Hallt Poland's largest conference and entertainment hall seating around 3,000. There is a viewing terrace on the 30th floor, 114 m above ground level. On New Yearts Eve 2000, Europets second-largest clock was unveiled at the top of the Palace of (ulturet each of its four faces being 6 meters in diameter. It is also the highest¬placed tower dock in the world.

Royal Castle
Built in the 14th century in Gothic style by the Mazovian princes, the castle was converted many times during the Renaissance and Baroque
periods. In the 18th century, it acquired its final Baroque-Classicist style, in which it was rebuilt from World War II destruction. The castle was the seat of the authorities of the First Republic of Poland from 1596 to 1795. It was the royal residence and also the seat of the lower and upper houses of parliament-Sejm and Senate. It was here that the Four-Year Sejm passed the Constiturion of May 3rd, 1791, and on Jan. 25, 1831 dethroned Russian Czar Nidlolas I as king of Poland. In 1926-1939 the castle was the headquarters of the president of the Second Republic of Poland, Ignacy Moscicki. Burned down during World War II, it was rebuilt in 1974.

Warsaw's Old Town
The Old Town, along with the adjacent New Town, is one of the most beautiful and most often visited sites in Warsaw. The buildings were originally buift in the 17th and 18th centuries. Burned down during World War II, the Old Town was meticulously reconstructed after the war. Its numerous colorful tenements with red sloping roofs and cha¬racteristic street lamps combine to create a picturesque panorama, with strong accents provided by the huge roof of the local cathedral and the Jesuit church tower.

Royal Łazienki Park / Palace on the Water
At first this was a royal zoo that King Stanislaw August Poniatowski turned into a garden in the 18th centuryt giving it its present Classicist
.shape. The most important building in the park is the magnificent Palace on the Water. Other buildings worth seeing include the Old and New Orangeries, the Amphitheate the White Houset Myslewicki Palace and the Podchorazowka (Officer Cadet. School) building. Above all, however, lazienki is a huge and beautiful park with lots of trees, birds, including regal peacockst and squirrels.
Also known as the Palace on the Water, this fine building was the summer residence of King Stanistaw August Poniatowski. In the begin¬ning, the Palace on the Isle was a simple pavilion that housed the baths of the Vasa kings; it was converted around 1690 by Tylman van Gameren for S. H. lubomirski. The present palace, in early Classicist style-which was also known locally as Stanislawowski style-is theresult of conversions from 1775-95. The designer was Domenico

Belvedere
Until recently the residence of the Polish president, historical the Belvedere was also part of Royal Łazienki Park. The original palace was erected in 1654 as the suburban residence of the Pac family. It was called the Belvedere due to its beautiful location. In place of the demolished Ujazdowski Church. a terrace was built at the southern end of the palace, below which a scenic garden was placed at the foot of me embankment The palace was the property of King Stanislaw August from 1765; in In4 the king set up a factory here to make porcelain and pottery called "Belvedere earthenware.