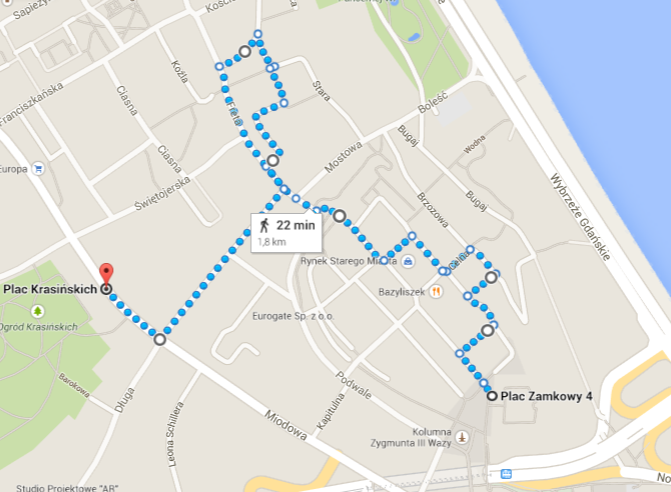 A historic center and the oldest part of the city, and at the same time a cultural center of the capital. It was set up in the 13th century as a ducal borough and a settlement surrounded by wall. During the World War II 90% of it was destroyed. Thanks to a perfect reconstruction, in 1980 it was classified to World Heritage Site. Currently is a vibrant place full of galleries, cafes and restaurants, perfect for walks.

Today the characteristic Castle and clock tower (from which every day at 11:15 am bugle call is played) opens the way to the Old Town. The Castle’s attractions are two original paintings by Rembrandt (“The Girl in a Picture Frame” and “Scholar at the Pulpit”) and Bernard Bellott’s, also known as Canaletto, works. He was a court painter of king Stanisław August Poniatowski. Canaletto’s paintings were a priceless help while postwar reconstruction of the city. At the Vistula side there are renovated Arkady Kubickiego (Kubicki’s Arcasdes), which have been supporting the Castle’s embankment, and giving a monumental shape to the garden elevation.

The castle was built in the 15th century and was a residence for Mazovian dukes. When the Polish capital was moved from Cracow to Warsaw in 1596 it became the seat of the king and authorities. Several times it was rebuilt, and during the World War II was destroyed. It was reconstructed between 1971 and 1988, using survivor fragments.

The oldest and the highest secular statue in Warsaw built in 1644, as a gift of honor from the king Władysław IV to his father Sigismund, who in 1596 moved the Polish capital form Cracow to Warsaw. The monument is 22m high and the king’s statue is 275cm high. In his right hand he holds a sabre, which symbolizes his bravery and in his left hand he has a cross – a constant readiness to fight the evil. The legend has it  that when the sabre will aim down, a catastrophe will happen to the city.

4.      “Gnojna” Hill – vantage point to the Vistula and to the right bank city panorama

Any sort of waste from the city was brought to the hill around 1774. It functioned as a garbage dump for about 400 years until it was so high that almost fell on the neighboring buildings. The stench was also becoming more and more burdensome, as well as the rats that lived there. After the closing, the garbage dump was covered with soil. Nowadays is serves as a vantage point.

Set up at the turn of the 13th and 14th centuries as one of the most picturesque places of the city, it used to be the main square in Warsaw – various events, fairs and sentences took place there. Since the beginning its form remains unchanged. In the central part of the Market there was a city hall, which was deconstructed in 1817. Entirely destroyed tenemetn houses were reconstructed in the way they looked like back in the 13th century.

The exhibition shows the history of the city. In the museum’s cinema a movie on Warsaw between 1939 and 1945 is presented from Tuesday to Saturday at 12 o’ clock.

It was built around 1548 as a part of Warsaw defensive wall, at the borders of Old and New Towns. Togethere with the nearby Łazienna Gate and Prochowa Tower it created so called Zakroczymska Gate.

Officially it was made from the the Old Warsaw as its suburban part, according to the act of 1408.

Museum of a Polsih scientisct who won a Nobel Prize twice is located at Freta 16 Street in a 13th century tenement house, in which she was bor in 1867.

Also called the Republic’s Palace, it is a typical baroque residence built between 1677 and 1695 for voivode of Płock Jan D. Krasiński, on the basis of Tylman of Gameren’s project. Currently, it is a home to National Library collection . Next to the Palace there is the Garden. Among the oldest trees from the end of 19th century, there are: gingko biloba (maidenhair tree), Caucasian wingnut, black walnut and Turkish hazel. Apart from the plants in the western part of the Garden, from the old Nalewka Street, there is a partially preserved baroque gate and a fragment of the fence.

Built in 1989 a monumental statue to worship the heroes of Warsaw Uprising. It is located on the east side of Krasiński Palace in Warsaw. Before it was built, there was fundraising of money and materials. The monument shows faces of insurgents. Some of them are entering a canal (reference to the evacuation of the Old Town), and others are running from under a huge pylon.

Restaurants located along the way